One week into our trip to The Stans, I thought I’d write a quick post on our first impressions of Uzbekistan. I’m here in Central Asia for a month with Rosie, one of my oldest friends: we’re planning on spending two weeks in Uzbekistan followed by two weeks in Kyrgyzstan (though we might also end up making a brief trip into Southern Kazakhstan). Side-note that this blog has been rather neglected lately, and I do have a few elephants to add from London and Paris but that will have to wait until I’m home again! Unclear how many elephants will be sighted here…

The first thing to say is that the sites we’ve seen of this country are absolutely stunning and I do not understand why more people don’t travel here. I’ll probably write a later post about why we decided to come to this region (and why you should too!) but safe to say that we’ve been thoroughly wowed by Tashkent (the capital), Khiva (an old Silk Road city, awkwardly most famous for being a key slave-trading post) and Bukhara (another Silk Road city and centre of Islamic learning). However, it is definitely the most off-the-beaten-track destination I’ve ever been to in my life and we have hardly met any other tourists at all – this can give it a slightly surreal feeling. While wandering around the deserted palaces of the Khivan Khans a few days ago, we found ourselves almost wishing there were a few more people around to see these amazing places! A far cry from the 14th century geographer Ibn Battuta’s description of Khiva as somewhere so full of people it was impossible to find your way in the crowd… All the Islamic architecture is incredible (the newer Soviet-era builds perhaps less so) – and in particular the Uzbeks are especially fond of fine wooden carving, for example on doors and columns, most of which are covered with intricate, winding flower patterns and designs. And the sunsets and accompanying twilight peachy-pink glow on the buildings are to die for! 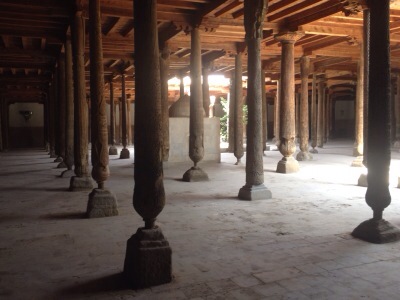 Carved wooden columns in an 11th-century mosque in Khiva

Travelling here has been relatively painless so far – though I think it is the hottest place I have ever been to, cue jumping from side to side of the road in search of rare patches of shade, and getting through about a bottle of water an hour. The heat is a sort of dry, dusty heat – almost desert-like – so we’ve taken the decision to intersperse the sightseeing with regular cooling-down pauses to make the heat more bearable. (I’m currently writing this in a rather lovely tea-house serving an intriguing selection of spiced teas and eastern sweets.) We recently found out that July is in fact the low season due to the extreme heat, and more tourists come in August or September when it cools down a little – whoops. On a more positive note we had heard truly terrible things about the food here before arriving but it’s actually delicious! Favourites include plov (a rice, carrot, sultana and lamb dish), laghman (a noodle dish similar to Malaysian laksa), and a range of aubergine-based concoctions.

The Uzbek people we’ve met have been very friendly, though we have had considerable communication difficulties. Most people speak Russian as a second language so we’ve been hastily trying to acquire a basic vocabulary (the important phrases apparently being “cold water please” – pronounced with a note of desperation – and “I don’t understand, I don’t speak Russian” – normally met with some astonishment), but we’ve exchanged a surprising amount of information with people by using sign language and drawing stick figures. The majority of people who speak English seem to be under the age of 10 so we also acquired in Tashkent a string of young translators who followed us round the bazaar and interpreted for us! One of them who helped us try (and fail) to acquire an Uzbek SIM card also had an amusing habit of whenever we asked a question, taking a long considered pause before replying “it is possible” or “it is not possible” with a heavy Russian-sounding accent and a tone rather too serious for his 14 years. I’ve so far only had to decline one marriage proposal.

The standard of living is higher than we had expected here but there are definitely a few quirks – for example there are very few cars around, despite gigantic multi-laned motorways. When travelling from Khiva to Bukhara (two fairly major cities) our vehicle was frequently the only one in sight! Those cars that are around are battered old specimens that look like they come from the 70s, and we’ve yet to see a single motorbike. There are very few “official” taxis: the way to get around is to stick out your hand on the road and see if a driver is going your way and can drop you off for a small sum of money. This means whenever you take a “taxi” you’re never quite sure if the driver does this for a living, or if he’s just decided it’s worth his while to be a bit late for lunch with his Aunty Mabel.

We’ve generally been impressed by the Uzbek fashion style which is on the whole smarter than in the UK (I wish I had brought fewer clothes in my rucksack and bought a couple of things here as the dresses in particular are lovely) – but less so by the trend of replacing all your teeth with a set of gold gnashers. Smiling starts to look a little creepy.

The currency is bizarre – there are no coins and the most frequently used note is the 1000 som note, which is worth about 13-14p. This means to pay for anything you have to quite literally carry round stacks of money, and we still have not got the hang of how to count out a hundred notes at speed. That will come hopefully! However, it does make us feel very rich as we carry round our bags of dosh. 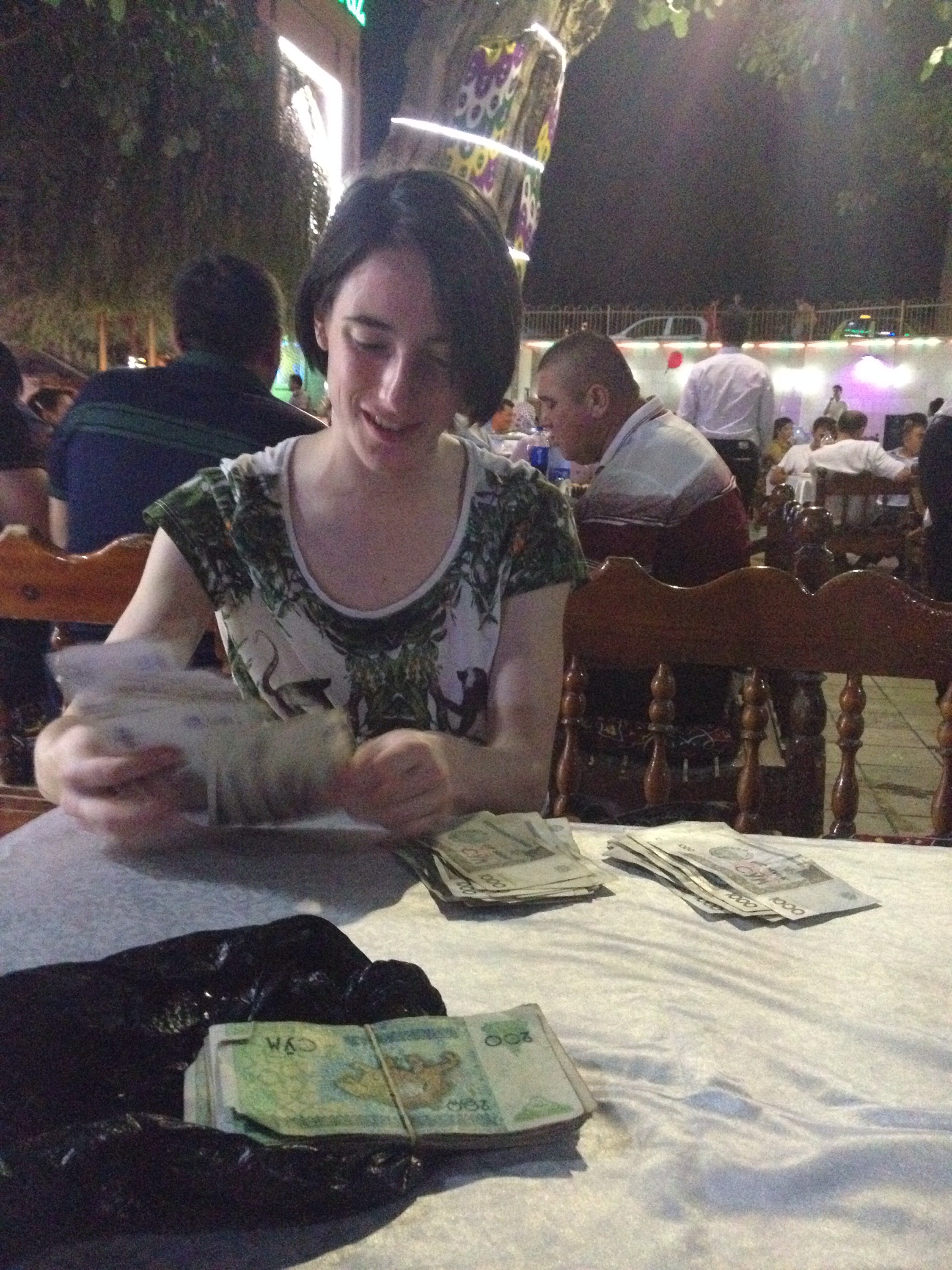 One week left in Uzbekistan now before crossing the border over into Kyrgyzstan – hope to post another update at a later date!