We are now approaching the end of our three weeks in Burma (also known as Myanmar – there’s some controversy over which name to use). It’s an interesting country to visit, especially at this time when it’s in the process of opening up: Aung San Suu Kyi and her National League for Democracy (NLD) party have just won a landslide victory and it looks like there could be a smooth transition of power in 2016. That looked impossible until just a few years ago. The general mood of the people we’ve met is one of optimism – although there is great poverty here, not to mention civil war and endemic corruption issues. But most people seem to think that Burma’s fortunes are on the rise. Even two or three years ago it was apparently dangerous to speak your mind about politics and tourists were warned to avoid mentioning any sensitive subjects that might get the local Burmese into trouble. But now people openly express admiration for “The Lady” (in a weird parallel to You-Know-Who in Harry Potter it used to be dangerous to speak of her openly) and dissatisfaction with the military regime.

However, travel in Burma is still difficult and at times, pretty frustrating. There are now large numbers of tourists visiting the country – 3 million last year, more predicted this year. (Interestingly, these seem to be of different demographic to other countries I’ve been to – most of the other travellers we have met in Burma have been considerably older than us, often retired. There’s hardly any “backpacker culture” here – not necessarily a bad thing!) But there is very little tourist infrastructure to support the influx of new visitors. For example, accommodation is incredibly overpriced for poor-quality rooms, and there are next to no hostels. We often paid $30 for a dingy, window-less box-room with a dirty shared bathroom on a different floor that would have cost $8-10 elsewhere in South-East Asia. The only exception was the lovely Chang Myaye Guesthouse in Yangon, an old-fashioned, quaint little place with beautiful wooden fittings in the centre of town.

Getting from city to city in Burma is in some respects not that difficult – there are daily night buses that run between almost any places you might want to visit, and they are easy to book. But these have not adapted to tourist needs: they usually leave at 6pm and dump you at your next destination at 4am in the dark. It’s no fun arriving in a new city at that time of day! The reason for this timetable is that locals like to travel at this time so that they don’t miss any work. But most of the buses we took were full of tourists and had no local passengers, so it seemed strange that no one had decided to run later services that arrived at a more reasonable time in the morning. Or buses in the daytime – Burmese roads are of such bad quality that you get bumped up and down vigorously, and sleep is impossible.

What was much harder was getting around in the local area of each destination: there are no metro systems and so forth in Burmese cities, and very few transport options for going on day trips from the cities. We knew Burma would be a bit more “off-the-beaten-track”, but we assumed this would mean taking more little buses or pick-up trucks to reach things. In fact, it meant that once we had got a base in a city, it was impossible to get anywhere without taking a moto-taxi or a private car. I also return to the bumpiness of Burmese roads – any journey, however short, and in whatever kind of vehicle, leaves you feeling bashed and bruised.

As for the sites themselves, some were stunning, and it has to be said that the Burmese landscape is beautiful, but there were a LOT of temples. Temples are fun to visit, but there is such a thing as too many temples… Part of the problem is that a lot of the country is still out of bounds for tourists so the number of places you can visit is actually quite limited. And the cities don’t feel that different to small towns (with the possible exception of Yangon), so it’s not like China or Vietnam where you can alternate between exciting, buzzing, high-rise cities and beautiful, tranquil rural vistas – in Burma it’s all a bit more same-y. Also, Burmese food isn’t a patch on other South East Asian food: it’s very repetitive, and features thick stews seasoned excessively with strong fish paste. Not what you want on a baking hot day – give me a Vietnamese pho or a Thai green curry any day. Given these two factors, I think we probably gave ourselves too much time in Burma – by the end we were struggling to find things to do with ourselves and we were becoming increasingly greedy for non-Burmese food.

Finally, there’s the fact that tourism in Burma can be morally and ethically uncomfortable. I didn’t realise before we had booked that up until 2012, Aung San Suu Kyi and the NLD had asked tourists not to visit the country as the military were using slave labour to built tourist infrastructure like roads and hotels, to get foreign money into the country at a time when most of the rest of the world were imposing weighty economic sanctions. This may happen less now, but the fact remains that most of those bumpy roads we complained so much about are bumpy because they were built by slave labour, by hand – sanctions meant that the government didn’t have access to much modern equipment. Child labour is still a huge problem. At first we thought all the young boys working in cafés and restaurants were just helping out their families, but we soon realised (after some reading) that they were in fact child labourers who leave their families in rural areas at the age of 10 or 11 to work long hours in city tea houses (6am-9pm ish) and the money gets sent back to their families.

I don’t want it to sound like our Burma trip has been all bad as we did have a great time – one of the positive things about travelling in a country where tourism is only just beginning is that the Burmese people are very curious and keen to stop and have a chat, whereas in other countries when this happens it’s often because someone is trying to sell you something in a roundabout way. It’s nice to have a break from the constant hard-sell. And we had some fab experiences, like the fire-stick festival in Kalaw, our hike to Inle lake, and our long and surreal boat trip down the Irrawaddy River. But by far and away the highlight of our stay was the abundance of amazing sunrises and sunsets we witnessed, so the rest of this post will focus on them…
Burma truly is a beautiful country, but I would probably advise friends to visit for two weeks not three (as we did) – at least until the tourist infrastructure develops more, which I’m sure it will.

Bagan is a field of thousands of temples built by many generous benefactors just under a thousand years ago – think Angkor in Cambodia, but without the jungle, and with smaller but more plentiful temples. We spent three days here exploring by bike, gazing at faded wall frescoes and peeking into nooks and crannies. Some of them you could climb up to see beautiful sunrises and sunsets across the plain – lucky travellers even take a dawn hot air balloon but at $320, we decided it was a bit steep. Another time perhaps… 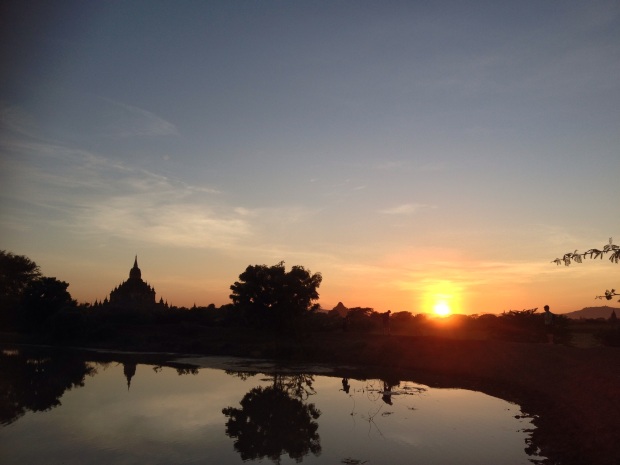 And another beautiful sunset spot…

Temples of Bagan just after sunset

Boat up the Irrawaddy river

We left our guesthouse at 4am to catch our lengthy ferry up the river from Bagan to Mandalay. We set off from the pier while it was still dark, just in time for this magnificent sunrise shortly after…

We set off in the dark, but soon were seeing sights like this 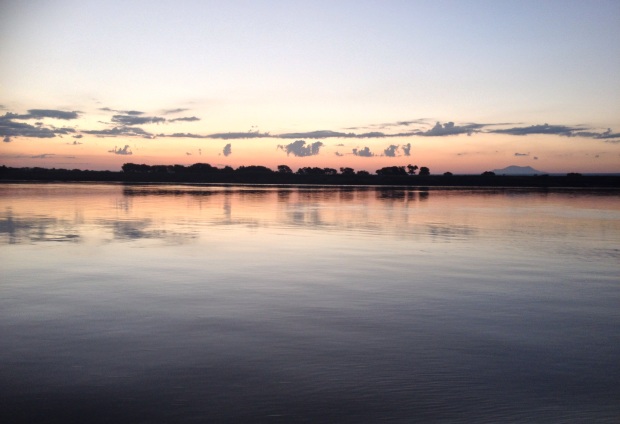 Before dawn on the Irrawaddy river

The sun is up!

The boat ride was so long that we also saw sunset on board before we got to Mandalay. There’s something quite special about seeing both an incredible sunrise and sunset on the same day – even better when it’s from the same place. It was a surreal day also because the boat was enormous (could have held several hundred passengers) and yet there were only four others apart from us! 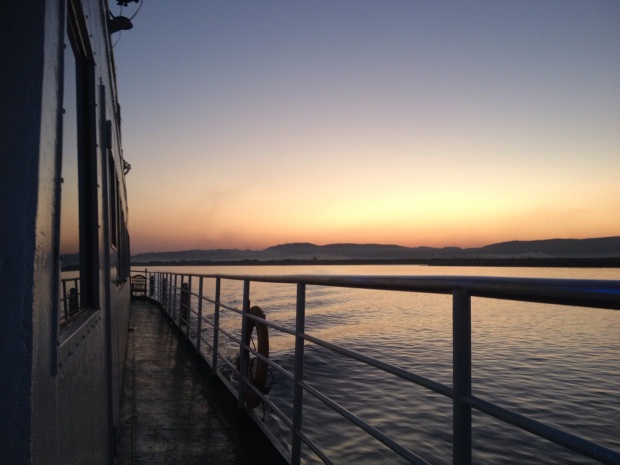 Dusk on board boat

This is a very long and rather rickety bridge made out of teak near Mandalay. You can go out in a little boat to get a great view of the sun setting behind the bridge and all the people hurrying backwards and forwards over the bridge.

Moseying around in boats by the U-Bein bridge

Pyin Oo Lwin is a former British hill-station (Maymyo in Orwell’s day). This was a sunset we saw after a visit to the botanical gardens…

We did the two-day trek between Kalaw and Inle lake, and this was the sky just after sunset in our homestay. The village we were staying in was idyllically rustic – to the point that we kept almost tripping over an enormous ox with HUGE horns on our way to the toilet outhouse in the dark. Yet somehow the cooks managed to produce flambeed banana for dessert…

Visited by Rudyard Kipling and George Orwell (of Burmese Days fame), this sleepy former colonial town boasts a sunset view from its hilltop pagodas that isn’t nearly as shabby as its crumbling houses. 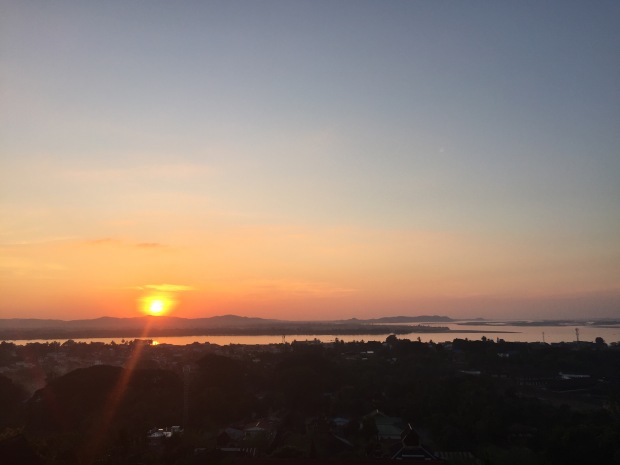 Next stop is Bangkok!