We were lucky enough to arrive in Kalaw, a small mountain town in Burma, on the night of the annual fire stick festival that takes place each year at the full moon at the end of November. This happened by complete chance – we had come to Kalaw to do some trekking and were just wandering round the town before dinner on the day we arrived and kept bumping into processions of dancing children carrying lanterns and realised something must be up!

We couldn’t work out much about what was happening, except that there were many brightly lit-up floats all heading to one end of town, and a general atmosphere of anticipation and merriment. One man told us to go to the football pitch at 9pm, so we grabbed some dinner and set out to look for this football pitch. It wasn’t hard to find from the crowds and clamour  – the whole town seemed to be crammed into this small field, complete with market stall owners selling a variety of grilled foods, and itinerant candy-floss vendors. All the Burmese were wearing woolly hats which amused us as it felt like a balmy summer evening to us – almost like a less chilly British bonfire night, which of course we missed this year.

At one end of the field they were heating up the inside of a home-made hot air balloon. So we went closer to have a look.

It looked rather precarious as it was made of sheets of thin plastic sellotaped together. In fact, it looked like the whole thing might catch fire at any moment…

We stood close by as it slowly started to lift off from the ground. What we didn’t realise was that attached to the bottom of the balloon was a basket full of fireworks. As soon as it left the ground, these started exploding – right at us!!

The balloon takes off and fireworks are shot towards the crowd below (that’s us!!)

Now, fireworks may be fun to look at when they shoot into the sky, but I can assure you that they are in fact quite frightening when they are shot directly at you from a distance of about 10m.

Luckily we did not get hit (though it was pretty close), but we went a little further away to see the rest of the fireworks.

Home made fireworks in Kalaw

Our trekking guide Pu Kwa explained the next day that this was the main part of the festival – a competition of homemade rockets. Basically a mix of shop fireworks… and some oh-so-safe bamboo canes filled with gunpowder.

Back at the hotel (that was situated next to the football pitch), we were dismayed to find that the field next-door had caught fire from falling rockets. 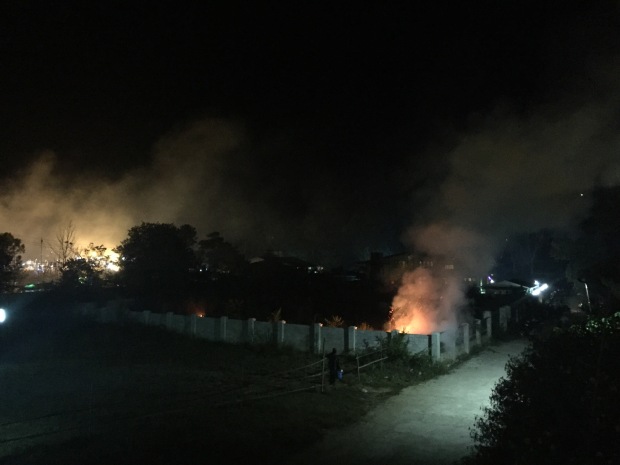 Fires in the field next door

Nobody seemed to mind about this though and after a while a man came with a comically small watering can to try and put it out.

Not everyone escaped as easily as us: this is me with Pu Kwa who got hit on the nose by a firework. He said that many people ended up with similar injuries each year. 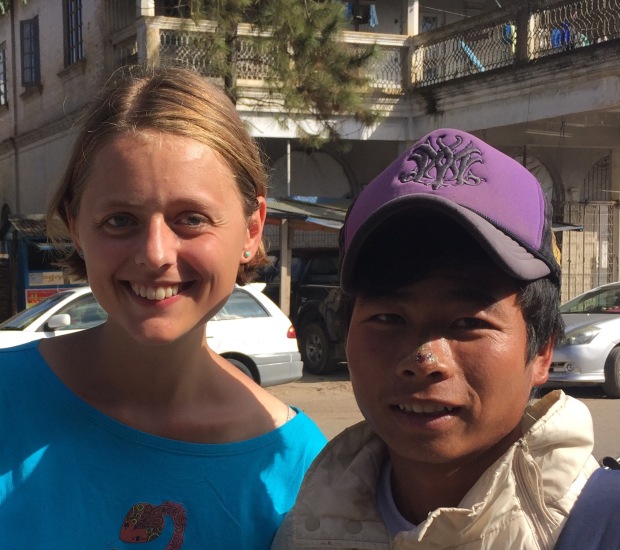 That nose looks painful but he was surprisingly upbeat about it

We had a great time at the fire stick festival in Kalaw, but we might have stood a little further away if we had known about the fireworks…