I’ve been informed that my last post was “too historical”, so I’ll try and stay more on track with this one! This is a little elephant I found in the Reunification Palace in Saigon. At the time I thought it made a rather nice stool but looking at the photo now it looks far too small for me! Perhaps a good stool for a child though, with its beautiful deep green colour.

We came to Saigon by train, by a 21 hour long train from Hue to be precise. It was quite the experience, as we had some rather “interesting” carriage companions: a cockroach, several rats that scurried across the floor, a woman who had several very loud and shouty phone conversations between 5.30am and 6.30am, and, most excitingly, a man who kept a box of silk worms under the bunk. If you haven’t seen a silk worm, they look like large maggots, and they kept escaping from the box and trying to make their way around the carriage. It was therefore something of a relief when we finally got to Saigon, also known as Ho Chi Minh City (if you prefer to keep your Vietnamese city names alliterative), though the train did have some cool views through the window along the way.

Our time in Saigon was fairly jam-packed, but this did include chasing Graham Greene around the city by visiting all the fancy hotels where either he or his characters used to hang out, and seeing “Spectre” at the cinema. It’s an awesome city, where old French colonial buildings in fading yellow and tree-lined boulevards stand cheek-by-cheek with flashy high-rises and gleaming modern shop-fronts, and it feels much more fast-paced than some of the other Vietnamese cities we’ve been to – we had a cocktail one evening at 52 floors up in the Bitexco tower and the whole city below us was ablaze with lights.

This elephant is from the Reunification Palace, previously the presidential palace of South Vietnam. It was an intriguing place to visit as it was built from scratch only in the 1960s and 1970s and so gives visitors a peek into what a world leader in that period would want in his palace and what would be considered the height of fashion then. I particularly liked the pavilion on the roof which was designed by the architect to give Vietnam’s leader somewhere to meditate and calmly think over the important decisions for his country, with beautiful views over the city, but removed from the hustle and bustle of everyday life. The first president to move in then added a dance floor and a piano and used it to hold rooftop parties: not quite what the architect had in mind I think…

The front of the palace: you can tell this is a 60s building but it is actually rather elegant as 60s architecture goes, and close-up it looks a bit less Soviet/concrete than this photo makes it appear 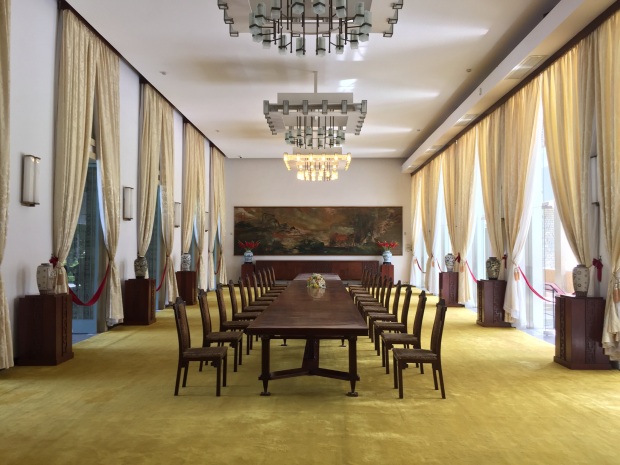