Yesterday, we took a short thirty minute flight over the Nazca lines. These are some of the coolest things I’ve ever seen (they are known to many as the 8th wonder of the ancient world) so I’m going to tell you a bit about them!

They are a series of shapes drawn in the desert plain around a city called Nazca, an 8 hour bus ride south of Lima. The desert is such that it is darker at the surface than underneath, so if you dig a small furrow, it appears as a pale line on the ground. Some of the shapes are just geometric – triangles, trapezoids and such – but many are animals – there is a monkey, a parrot, a flamingo, a whale and many others. It’s thought that the ancient Nazca people etched them into the plain between 100-700 AD. Pretty cool, no? What is more intriguing is that they are pretty large drawings, so you can only see them from the air. (I think this is the same for crop circles but might be wrong about that…)

They were first spotted in the 1930s when commercial flights started passing over the area and noticed the shapes. Since then there’s been a huge controversy over why the Nazca people spent so much time and effort drawing the shapes – they extend over 1000km2 and if all the lines were added together they would reach 1500km. The first archeologist to study them thought that they represented star constellations, as many of the animals mirror shapes that we can see in the night sky. He called them “the largest astronomy book in the world”. This theory was developed subsequently by the formidable German Maria Reiche, a self-taught archaeologist who lived in Nazca and studied the lines for 50 years. (SPGS people note that she would almost certainly have gone down on ClaFarr’s ridiculous list of Paulinas that would have been). The townspeople still greatly venerate her, referring to her as ‘Maria’ as if she were some sort of saint, and almost every restaurant has a ‘Maria Reiche sandwich’ or similar. However, Americans studying the lines in the 80s decided they were processional lines that were used in sacred rituals to dance along, as each figure is drawn with a continuous line. They also suggested that some figures might point to water sources as so be a way of asking the gods for water. Whatever you believe, there’s no doubt that they are a remarkable feat of artistry.

The easiest way to view them is from the sky, so there are a number of companies which offer flights over the plain. We were a little nervous about taking one of these as the foreign office advice for British travellers said that there were numerous fatal crashes every year and it was the most common cause of death for British travellers in Peru, so we signed up with what seemed to be the most reputable looking flight company. The flight was in a small 6-seater plane with us, 2 other tourists, and 2 pilots – I’d never been in a plane this small so the take off was pretty terrifying but once we were in the air, the view was incredible. We’d been told not to eat that morning which was very good advice as I’ve rarely felt so nauseous – over each sign the plane tipped first right then left so that both sides of the plane could see the lines properly, and when I say ‘tip’ I mean roll all over so the plane was flying with its wings at right angles to the ground. Scary and amazing at the same time – but I think I realised I’m not cut out to be a pilot/have a job involving flying. Guess that’s one more career to be ticked off the list of possibilities… 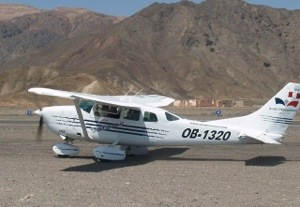